LifeArc scientists, working with researchers in Manchester, have contributed to a fundamental breakthrough in organic chemistry that will help accelerate drug discovery.

The findings reveal that seemingly impossible chemical reactions can be driven through a phenomenon called quantum tunnelling. This unexpected discovery clears the way for synthetic chemists to attempt reactions that are thermodynamically and kinetically unfavourable – opening exciting new opportunities to speed up the process of drug discovery.

The study was published in Science in September.

We spoke to senior scientist Kevin Gillen to find out more about his role in this research – and how it will make a difference to medicinal chemists searching for new drugs for treating a variety of different diseases.

What’s your role at LifeArc? 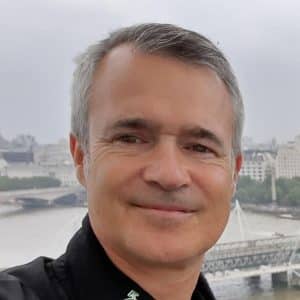 My work involves designing and synthesising new molecules for our drug discovery projects – many of which are searching for ‘small molecule’ organic compounds that could be developed into new drugs. I’m really keen on using synthetic chemistry innovations that could help speed up this process. One particular area of interest is using photochemistry – using light to catalyse chemical reactions.

While this isn’t a new technique, it’s had a renaissance over the last decade or so. It offers an alternative way of making molecules under mild conditions – by shining a light to catalyse a reaction, rather than using high temperatures or toxic metals.

How did you get involved in this research?

It was through a collaboration with a team of academics led by Daniele Leonori, Professor of Organic Chemistry – who was at the University of Manchester but has since moved to RWTH Aachen University in Germany. It was a real pleasure to work with this group of talented and knowledgeable researchers who were extremely helpful and easy to collaborate with. In this project, they successfully developed an alternative strategy for generating carbon radicals – which is a bread-and-butter reaction in organic chemistry – under mild photochemical conditions.

Why is this discovery important?

What’s really significant is how the reaction happened – as theoretically, it shouldn’t work due to unfavourable thermodynamic and kinetic considerations. But it was rendered feasible through quantum tunnelling – a phenomenon where particles can pass through an energy barrier that should be impossible for them to surmount. By advancing our understanding of how photochemistry can use quantum tunnelling to enable bond forming processes, this discovery should help to generate new ideas in the field of organic chemistry. That’s why it’s caused so much excitement in the wider academic community.

What was your role in this study?

I adapted the protocol to ensure it was suitable for translation to a larger scale for industrial applications by using photochemical flow reactors.

Demonstrating that it’s possible to scale up this reaction using flow chemistry, which uses specialist equipment where pumps move fluid continuously through thin tubes, should mean that medicinal chemists don’t shy away from using photochemistry at the early stages of drug discovery. It shouldn’t create any problems at the next stage of development when larger quantities of the compound need to be manufactured for testing in clinical trials.

What difference will this make to drug discovery?

Most small molecule drugs come from many years of laboratory work – the end result of a painstaking process of designing and synthesising individual molecules and testing their effects in biological systems. Any new tools that can help medicinal chemists to speed up this process are always welcomed.

Developing new ways of doing chemical reactions provides more options for making molecules, helping to expedite the drug discovery process. In some cases, it might encourage us to try reactions we might not have considered before – or else, it provides a complementary way of doing a reaction that’s easier to achieve. For example, in one of our projects, it was taking us seven or eight reactions to get to the desired product using traditional methods – but we have managed to cut that down to just three steps by incorporating a photochemical step.

Find out more about LifeArc’s drug discovery work, which centres on early-stage academic research for conditions where there is a need for new treatments – and ways of working with us.

LifeArc played an important part in the discovery of lecanemab, an experimental drug that has shown some benefits for people with early Alzheimer’s disease.