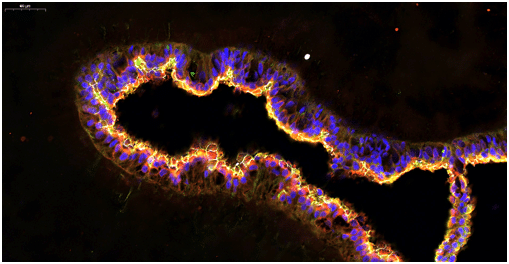 Candidate drugs to treat the central nervous system could be screened with three-dimensional brain tissue grown in the laboratory. We accelerated this technology’s journey to market, so it can be more widely used for research, drug development and ultimately, to benefit patients.

The blood brain barrier (BBB) is very effective at excluding pathogens and toxins, but it also blocks access to certain therapeutic agents.

It is difficult to confidently predict whether candidate drugs will cross the BBB and too often, the answer does not become apparent until a Phase 1 clinical trial is underway, at which point there has already been significant investment and commercial risk.

Dr Madeline Lancaster and her team at the MRC Laboratory of Molecular Biology (LMB) in Cambridge might have the answer, in the form of cerebral and choroid plexus organoids, which are self-organising, three-dimensional cell cultures generated from human pluripotent stem cells. These organoids, nicknamed mini-brains, provide a miniaturised and simplified version of specific brain tissues.

Previous systems have tried to mimic the choroid plexus, but lacked such complex tissue architecture or comparable functionality.

Focus on the choroid plexus

Part of the team’s focus is on the choroid plexus, a secretory tissue in the brain that forms a protective epithelial barrier and secretes cerebrospinal fluid (CSF). However, little is known about the regulation and permeability of this barrier.

The team has developed a protocol to generate three-dimensional choroid plexus organoids, offering an unprecedented and reliable way to study the functions of this structure and its permeability to compounds, peptides and proteins.

We are very excited about the research directions these new organoids will enable. Cerebrospinal fluid is understudied and yet its function in cleaning the brain of toxic by-products and providing much needed nutrients is vital. These organoids will open up new avenues in understanding how this vital fluid is made and how drugs get into the brain.”

LifeArc has helped to accelerate this technology’s journey out of its home lab so it can find wider use as soon as possible.

After careful assessment of the published literature and patent filings, LifeArc filed a patent application directed at product claims (choroid plexus organoids), methods of production (protocol for making the organoids) and methods of use (assessing the BBB permeability of potential therapeutics).

We then started discussions with STEMCELL Technologies, a global Canadian biotechnology company with a local manufacturing facility in Cambridge. The result was an exclusive patent and know-how licence to develop and sell choroid plexus organoids, associated culture media kits and screening services.

The Lancaster lab brings its message to the public through accessible and engaging online videos. Find links to BBC Future, TedXCern and more on the lab’s website at mrc-lmb.cam.ac.uk

The company will now work to optimise organoid production and refine the associated culture media, to enable wide uptake of the technology by the scientific research and drug discovery communities.

All Case Studies
Where next?
Our strategy
Who we are
Our impact
My Interest
Academic Scientist
Pharma/Biotech
Medical Charity
MRC Scientist
Research Organisation