Innovative diagnostic test for tuberculosis could save millions of lives 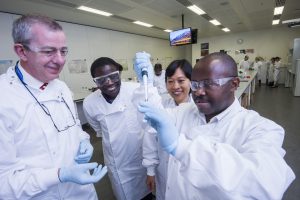 London, UK, 9 August 2018: Lifearc® the medical research charity, and The University of St Andrews Infection Group today announced a partnership to develop a molecular diagnostic test for the detection and quantification of tuberculosis (TB) bacteria in patients.

TB remains the leading cause of death from a
single infectious agent, ranking above HIV/AIDS,
according to the World Health Organisation’s Global Tuberculosis Report 2017.

LifeArc and the Infection Group, led by Professor Stephen Gillespie, will jointly develop the Molecular Bacterial Load Assay (MBLA). The test will effectively use molecular methods to count the number of live bacteria. Technically it is based on the RT-qPCR enumeration of Mycobacterium tuberculosis 16S rRNA from viable tubercle bacilli. If successful, the diagnostic will be progressed to a CE-marked in-vitro diagnostic (IVD) that can be made available to patients around the world. Speed is of the essence in diagnosis and MBLA does in hours what the competing culture-based methods do in weeks.

Michael Dalrymple, Executive Director, Diagnostics & Science Foresight at LifeArc, said: “We are eager to work with The University of St Andrews to progress the assay from research use to a stage where more patients can benefit from its application. Millions of people contract TB every year. With an appropriate diagnostic, patient treatment and recovery should be much improved.”

Professor Stephen Gillespie said; “This test allows doctors and health care workers to diagnose tuberculosis and to monitor the response to treatment in a single assay. Its speed means that better treatment decisions can be made.”
The collaboration with LifeArc is important to the St Andrews group as it will enable us to bring this test to patients who need faster diagnosis and better treatment. TB still kills around one million people per year globally. The new diagnostic test has the potential to reduce that figure by hundreds of thousands.

LifeArc is a medical research charity with a 25-year legacy of helping scientists and organisations turn their research into treatments and diagnostics for patients. LifeArc is pioneering new ways to turn great science into greater patient impact. It brings together a network of partners to tackle specific diseases and directly funds academic and early stage research. So far, LifeArc’s work has helped to develop four drugs (Keytruda®, Actemra®, Tysabri® and Entyvio®) and a test for resistance to carbapenems. www.lifearc.org Twitter @lifearc1

Michael Dalrymple is available for interview.

St Andrews has an in-house ISDN line for radio and a Globelynx camera for TV interviews. To arrange an interview please contact the Communications Office in the first instance.

Issued by the University of St Andrews Communications Office.